5 Things What Scratching Posts Do For Cats?

What do Scratching Posts do for Cats?

If you have not previously obtained a scratching post for your cat, after you read what we have to say, you might just change your mind.  Many people wonder what scratching posts actually do for cats. Some people seem to be under the impression that they are just more useless toys for cats, big and expensive toys. However, that is simply not true. While a scratching post might seem mundane, there are many purposes served by these little posts other than to keep cats from scratching furniture. What things do scratching posts do for cats is the main question that we are here to answer today.

Keeps Their Claws at a Good Length

One of the things which scratching posts do for cats is control the rate of claw growth and the length of their claws. Cat claws keep growing for as long as cats live. They never slow down and they always grow longer for the entirety of the cat’s life. If you think about it, this is not unlike our own human fingernails which keep growing as well. We humans have fingernail clippers and little tools to help us out with this never-ending nail growth.

However, cats do not have these little tools, nor can they use them if they wanted to. Of course, you could always clip or file your cat’s nails,  but why go to the hassle if they can use a scratching post to control claw growth. In the wild, a cat’s claws are natural filed down when they scratch on trees, dig through the ground, or catch their dinner. However, this is not true for a house cat. You could declaw your cat, but that is cruel and inhumane. On the other hand, you probably don’t want to come home to sofas and curtains torn to shreds.

It is not like your cat is a bad animal and is purposefully ruining your belongings. It is just because they need to control claw growth, whether knowingly or instinctively. Well, this is exactly what scratching posts are for. So you don’t have to declaw your cat and so they don’t rip apart your furniture while still being able to scratch something and control the length of their claws. This is necessary because claws that don’t stop growing and get too long come with their own set of problems. Therefore, to control claw length, a scratching post is very important.

The act of scratching also allows the cat to stretch, using their muscles to do so at the same time as they are also scratching. Think of a human exercising; to do so on a regular basis reduces stress buildup.

Another thing which scratching posts do for cats is that they allow your cat to fulfill its natural urge to mark its territory. Yes, cats often spray urine to mark their territory, but that is not the only thing. Cats also have scent glands in their paws and used for the same purpose of marking territory. When cats scratch something, some of that secretion comes out of their paws and clings to whatever they have scratched.

Marking territory is something that many animals do in the wild and domestic cats do it too. If you watch a nature show, you will see how lions and tigers scratch trees and other things to mark their territory. Of course; this is to tell other animals especially of the same species that the territory belongs to the cat that marked it. It is a way to tell other cats not to come into this territory. That the mates are taken, and that the food is spoken for as well.

At home, especially when it comes to house cats, this territorial marking could take its toll on your sofas and other furniture, which is something that you don’t want. This is also what a scratching post is for – to allow your cat to mark its territory without shredding the interior of your home.

Just like kids and people of all ages, cats get bored and they like to have fun. Cats love scratching things, chasing things, playing with yarn, and other fun cat stuff. Scratching on a post climbing up it and just playing around are all just things cats do to have fun and occupy themselves. If your cat gets bored you may notice they break things and tear stuff apart; which is not good. A scratching post is a great way to keep a cat occupied while keeping it away from your valuable and beautiful furniture.

It Speaks to Their Natural Urge

Another thing that scratching posts do for cats is satiate their natural urge to scratch. Yes this does have to do with marking territory and controlling claw growth to a certain extent but it is also more than that. Cats, just like every other being on this planet, are products of natural selection and the survival of the fittest. They call it evolution and it is why cats have claws. They need their claws to perform various activities, especially when it comes to finding food.

Cats have claws, and therefore have a natural urge to scratch things. This is also part of the natural instinct to hunt for food and kill it. Think about it, a cat scratching a post is somewhat similar to a cat killing its dinner. Although these killer instincts are quite mute in house cats, they still come out every now and then. It is better that these instincts show themselves on a scratching post rather than on your furniture.

As you can see, there are many different things that a scratching post does for a cat. It helps to relieve boredom; and helps to satisfy their urge to hunt for prey. Also helps them think that they are marking their territory; and it is good for controlling nail growth too. There is also the fact that a good scratching post will help keep your furniture in good shape too. If you have not considered getting your cat a scratching post, we would definitely recommend getting one. 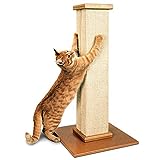 If you want to make sure that you are getting a durable scratching post that is going to hold up well, even in a multi-cat household, this is a great option

This scratching post is an activity center for your cat, as well as a comfortable place for them to have a nap.